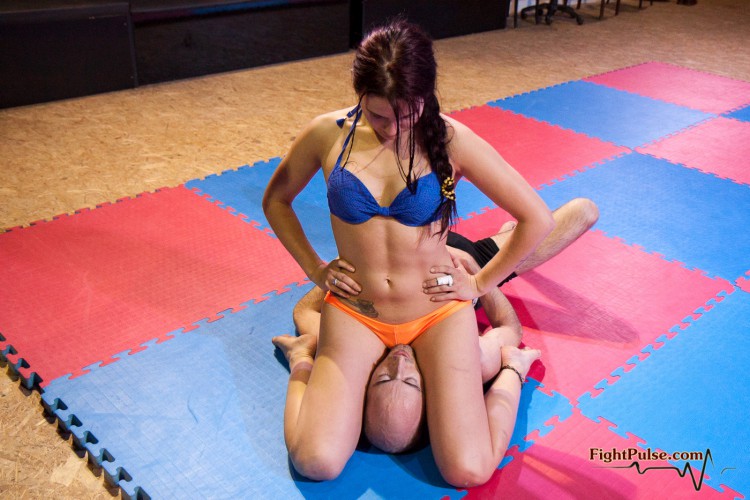 Jane (stats) fights, dominates and humiliates James (stats) in this semi-competitive mixed wrestling match. The only reason this title is categorized as NC, and not MX, is that despite the agreement that James will do his best to win, and both parties agreeing to a competitive match, he seemed tired at times and we weren’t convinced by his effort in certain parts of the match. This, of course, didn’t stop Jane from enjoying her total victory over yet another male opponent.

Almost each round starts with an intense takedown, Jane-style, almost instantly with her gaining a dominant position or a scissor hold. We have referred to it before, but would like to say again that it is absolutely astounding how fast Jane moves from her knees. For example, take a close look at Jane’s rush and takedown at 09:45 in the video – the speed is ridiculous, and it genuinely looks like the playback is accelerated. We viewed this fragment in slow-motion to see how she does it, but failed to understand. James also mentions these takedowns in the post-match interview.

These takedowns then almost always lead to schoolgirl pins or tight body and headscissors, and very rarely is James able to resist or escape the holds. NC-42 is an absolutely one-sided mixed wrestling match with Jane dominating her male opponent throughout the match, throwing in verbal humiliation near the end, capping the match off with a beautiful tight schoolgirl pin, calling James a loser, and ending it with a foot on face victory pose.

In the post-match interview Jane says that she expected a tougher fight from her opponent. 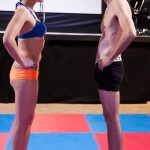 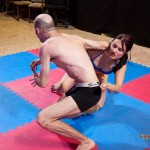 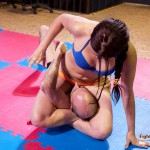 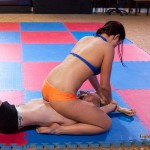 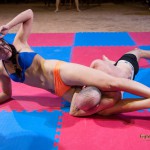 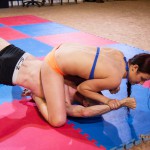 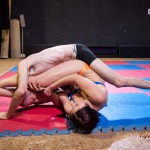 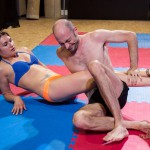 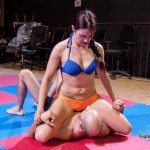 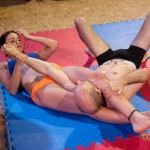 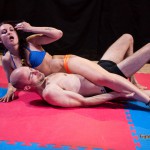 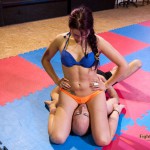