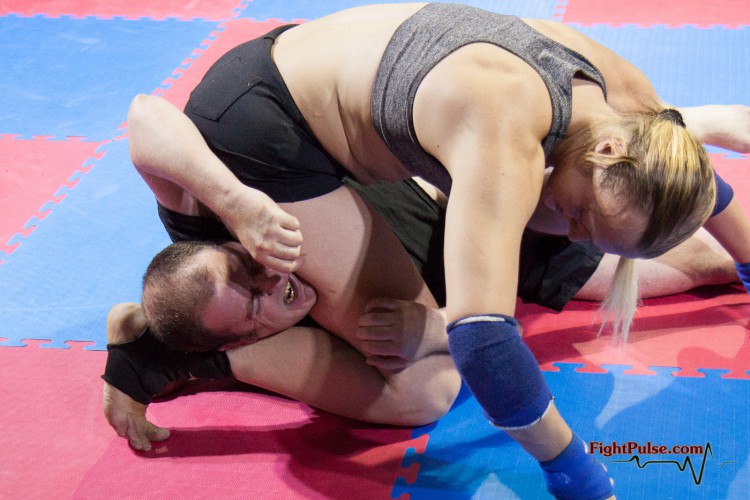 Anika (6′ 4″, 190 lb) is Fight Pulse’s latest discovery. She is a true modern-day Amazon, as well as a fighter by heart. She has devoted most of her life to fighting and is a formidable opponent for anyone – man or woman. Take a look at her profile for more info: Anika

This is Anika’s first mixed wrestling match, and she is facing one of our stronger male wrestlers, Diego. As much as we wanted to create suspense with this description, there is simply nothing we can say to achieve suspense without lying. The encounter between Anika and Diego is one between a predator and her prey. The 6′ 4″ Amazon towers over Diego, and grabs him with her strong arms and legs and throws him around without much trouble during the entire fight. While Diego shows some signs of fighting back in the beginning of the match, before his stamina runs out, and while Anika is making a transition from the grappling style to which she is used to (Side note: Anika is a very-well trained MMA and Muay-Thai fighter, and her grappling game is strong. However, she has never wrestled in classic submission wrestling style – with pins and scissors. You will see during this match Anika giving up possible leglock submissions that she unintentionally went for.), after several rounds the match becomes a wrestling beatdown. Despite sudden bursts of energy now and then from now-tired Diego, there is nothing he can do to escape the long strong legs of the giantess, or even withstand their crushing power. Most of the submissions come from bodyscissors. Once Anika gets her legs around Diego’s torso it is only a matter of seconds until he gives up. It becomes worse for Diego towards the end of the match, as he is running out of breath. The amount of points achieved by pins & submissions in this match is up there with our most one-sided matches.

We have to say that Diego, not being the submissive type, did not take the situation lightly. In one of the later submissions, instead of tapping the mats / Anika’s body, he tapped his hand onto her face. Although we had a strong urge to stop the action and berate him for such intentional disrespect, we decided to see what would come next, since we were certain that not only would Anika be able to handle the situation well, but also teach Diego in quite a clear way some manners. And that is exactly what happened in the last round of the match.

All in all, this is an emotionally tense encounter. It is also a beautiful one-sided wrestling match between a natural Amazon and her present male prey. 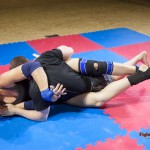 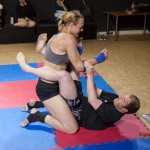 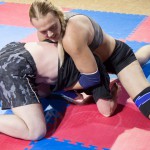 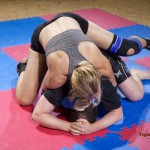 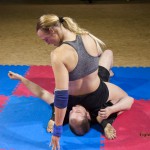 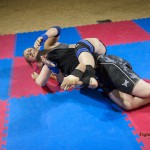 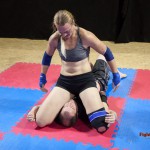 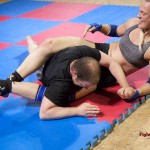 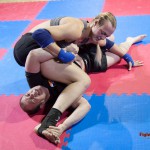 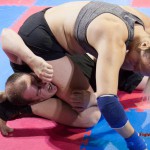