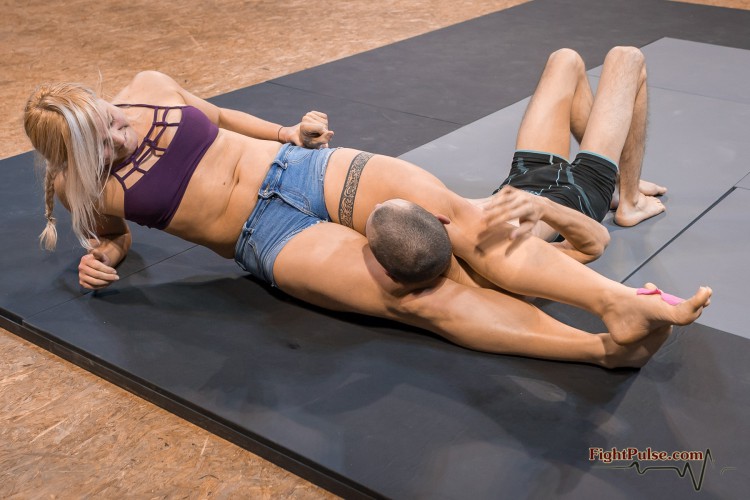 In her first real match at Fight Pulse, the promising newcomer, Scarlett (stats), squares off against an experienced male opponent in Frank (stats) in what turns to be an intense, aggressive, competitive, mixed wrestling match!

The force of nature, Scarlett, has a considerable weight advantage over her smaller opponent, while Frank is vastly more technical and experienced in mat combat. Can the aggressive newcomer bulldoze her way to victory in her first real match against a man, or is Frank too much for her at this stage?

Since Scarlett started her Fight Pulse career with a domination video (NC-158), you will hear from her for the first time here – about who she is, what she does for strength training, and why she loves wrestling. 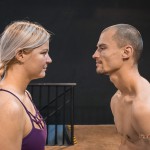 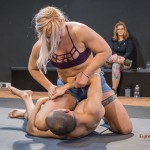 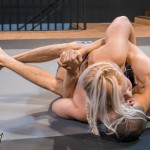 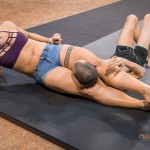 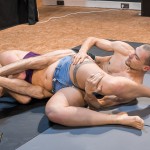 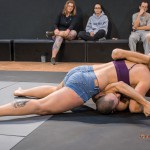 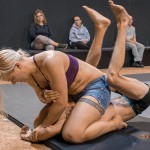 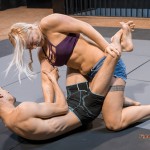 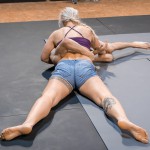 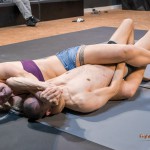 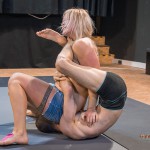 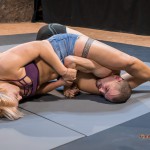 Very close matchup ! Scarlett is way bigger and stronger which caused Frank most of his problems here. He got manhandled and was controlled most of the time. But due to’ his technical edge he could score enough to squeeze out a tie. But rightfully the final decision went to Scarlett due to her dominant appearance. Very enjoyable match. Scarlett looked incredible in this nice revealing outfit which showed her strong and sexy feminine body and it was hot and sweaty.

In this match Scarlett still lacks technique which is a hole in her game and potentially dangerous to her opponent in regards to Injuries as Frank mentioned. But we have seen her technical progress in her encounter with Peter and I am sure she is always progressing. If she keeps combining her high-pressure physical wrestling style with her improving technique she is amazing to me. A real beautiful amazon that creates very enjoyable moments and an intense experience on the mats… big fan,here !