Our first ever competitive onslaught-style mixed wrestling match features the Hungarian Amazon, Tia (stats), completely crushing her smaller opponent’s efforts and physically dominating him like he is nothing but a toy from start to finish despite his best efforts to fight back, in possibly the biggest mismatch we have ever filmed.

As you know, dear Fans, Tia is a highly-skilled and incredibly powerful woman. Put her skillset and athleticism aside, she would still be able to easily womanhandle the lightweight male, Andreas (stats), with considerable ease. MX-86 is as one-sided as real mixed wrestling can get, with absolute physical dominance of the female. Andreas looks like a small boy trying to fight his athletic mother, who pins him down, inflicts pain and forces him to submit at will, posing over him and humiliating him while he is stuck.

The ingenuity of holds that Tia subjects her unwilling opponent to is remarkable. We have difficulty naming some of the holds, which you will not find in the taglist below this release. Tia puts Andreas in pretzel-like holds, making Andreas admit submission again and again. Since this is an onslaught match, there are no rounds, and Tia switches holds giving Andreas little time to recover before he is forced into another painful and degrading positions.

The victory pose that Tia performs over her outmatched and exhausted opponent is as diverse as the holds she has used prior to it and includes facesitting, inserting her toe in his mouth, body and face treading.

MX-86 is no doubt one of our best domination videos, in spite of being an MX title. Fans of females displaying their physical and athletic superiority over smaller males with inferior builds will absolutely love this (mis)match. 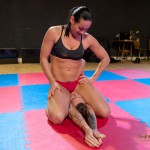 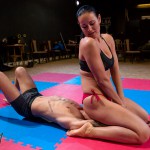 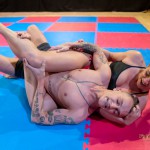 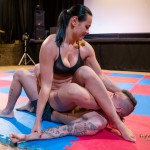 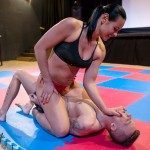 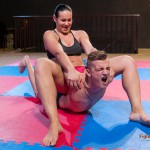 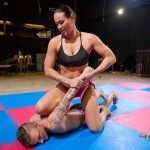 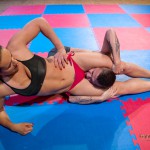 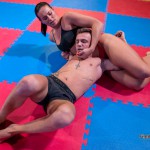 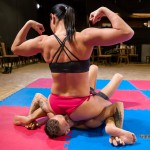 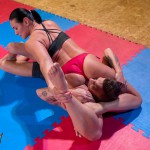 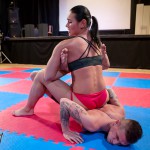 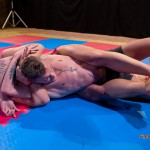 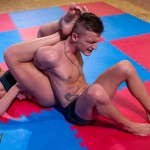 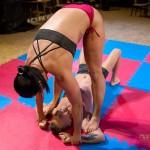 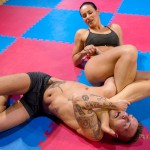 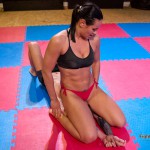 This is great example of a strong woman completely dominating a man in a mixed wrestling match. Tia puts on amazing display of wrestling knowledge, power, and dominance as she really takes it to Andreas throughout this video! She makes him submit over and over and makes it look so good and so easy! This video is billed as competitive wrestling, and it is in one sense. In that both are trying their best. But Andreas’ best is just no good against a female wrestling warrior like Tia!!! And because of that, it quickly becomes much less competitive and much… Read more »

Thank you Tactician!! I am glad that you liked my review of this match! I liked your review here, as well. Tia is GREAT!!!!!

I always enjoy watching her wrestle the men, and I love seeing her beating and dominating them, of course!!!
😀

Great one sided competitive video. Andreas endures a realistic total onslaught by Tia. No matter how much he tries to escape Tia’s holds and gain an edge, he is forced to endure painful scissor squeezes and long facesit smothering. Tia is bigger, stronger and far more skillful a wrestler than Andreas. Tia’s grip on Andreas was constant and she pins him down with ease. At one point he is let loose by Tia and should have got up and run, but she quickly hooped on him and wrapped her legs around him. She tells him he will continue to suffer… Read more »