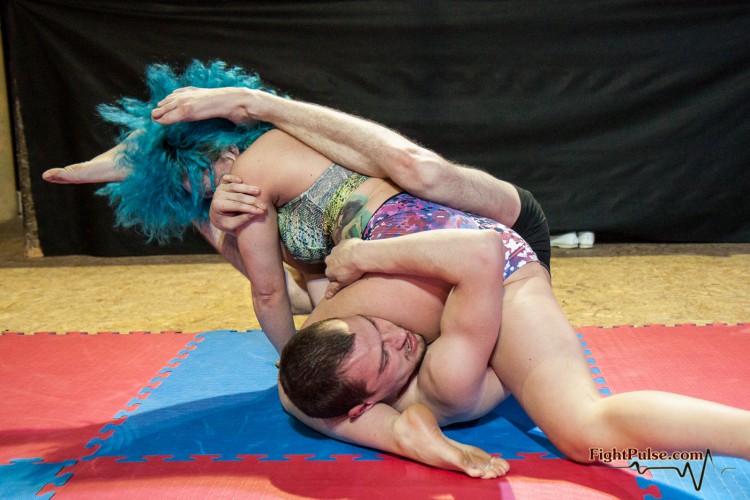 Finally, here’s our first mixed wrestling release with the amazing UK wrestler, Amethyst Hammerfist (stats)! This release, as well as all other releases with Amethyst Hammerfist and Sky Storm, were originally announced in May after their visit to Fight Pulse, the account of which you can read in this blog post. The wait is over! And let us assure you, it was worth it, – NC-32, where Amethyst is pitted against our talented newcomer, Frank (stats), is one of our most exciting mixed wrestling releases of this year! Amethyst Hammerfist is every bit as feisty and entertaining to watch as we expected!

Even though this is an NC release, the action is often as competitive as in many of our MX titles, in parts more intense than you would usually find in them (see rounds 8 & 9). The intensity that Amethyst brings to the mats is sensational. Look no further than this title to see why this new feisty session wrestler from England has become so popular in such a short time. She keeps the pressure on during the entire 21 minutes of the action, always struggling to gain advantage and refusing to submit when the advantage is lost. A good part of the match Frank spends with his neck trapped between Amethyst’s legs – it turns out, Amethyst is a master of headscissors, able to find, catch, and squeeze her opponent’s neck from any angle until the sweet sound of a tapping. This title is full of fantastic headscissor submissions – side scissors, figure-4, reverse-figure-4, reverse triangle, reverse headscissors, and more.

In NC-32 Amethyst controls the match with Frank from beginning to end achieving a record number of points both via pins and submissions, ending the onslaught with a beautiful assertive victory pose. If you are a fan of intense mixed wrestling with the female in control and dominant the entire match, we highly recommend this title to you. 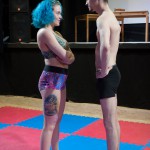 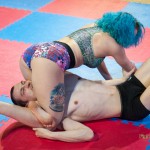 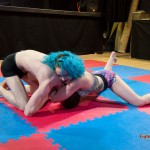 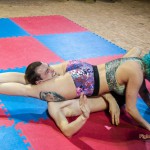 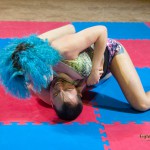 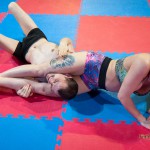 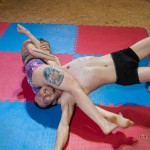 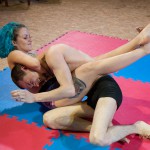 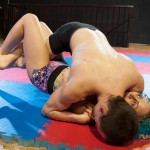 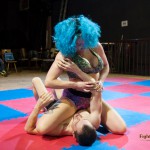 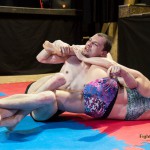 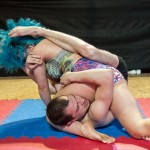 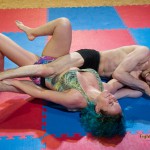 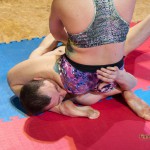 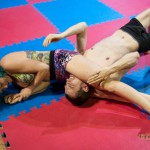 Great NC match that could have been classified as MX. Frank tries hard but cannot match the speed or the talent of Amethyst and eventually runs out of steam. It is a shame that rear neck choke submissions were not allowed, for safety I presume, but this was only an NC match. Keep up the good work guys.