In her first ever mixed wrestling match, our newest wrestler, Mia (stats), is pitted against Frank (stats), in a semi-competitive battle. Mia’s debut at Fight Pulse has everything one could hope for in a mixed wrestling debut – fast action, display of athleticism, strength, technique, and most of all, attitude.

When Mia first wrote to us about joining Fight Pulse, she said in her email that she enjoys fighting. We didn’t know to what extent until she stepped on the mat and this match began, when Mia sprang onto her opponent and immediately tried to apply a hold. She remained incredibly active throughout the match, thoroughly womanhandling Frank round after round, achieving a record amount of points within 15 minutes of wrestling time. But what is captivating the most about this match is not the amount or variety of holds that she applies, but her obvious excitement from being in control and forcing her opponent to tap again and again. Mia constantly watches his face throughout the holds and scans him after the submission / pin visibly enjoying every aspect of her dominance. Some of her looks are captured in the photos below as well. In the post-match interview she confirms our observations by saying that “it feels good to defeat a man”.

But besides her attitude, Mia brings superb athleticism to the mats. She is a sports freak, and you can see how naturally she moves during the match, and how quick she is with position changes, despite having only practiced pins-and-submission style wrestling only before this match. While we haven’t yet seen Mia in a competitive female wrestling match, she is definitely one to watch in the upcoming lightweight championship.

If you are a mixed wrestling fan, regardless of whether you prefer fully competitive, semi-competitive or non-competitive action, we think you will enjoy watching Mia destroy her opponent round after round, visibly enjoying each one of them. We would be surprised if you didn’t become a fan of Mia after watching this title. 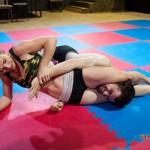 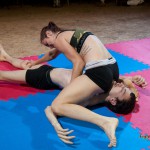 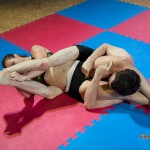 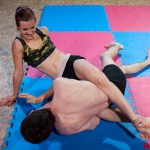 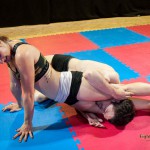 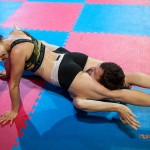 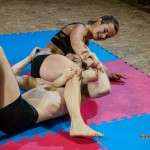 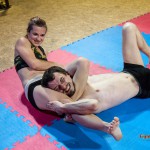 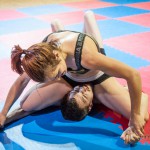 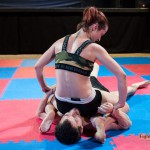 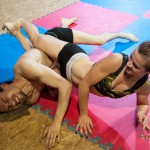