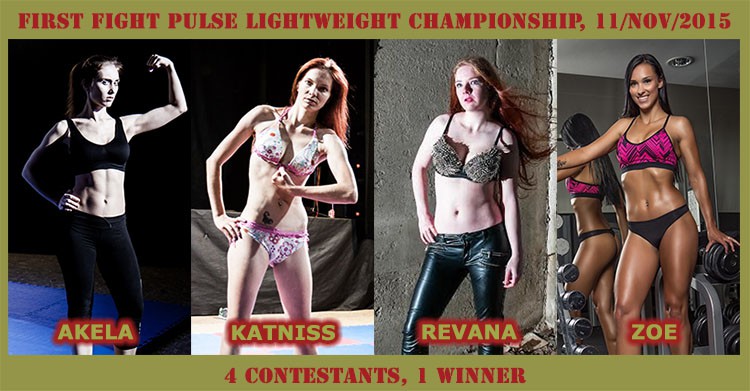 Before revealing the details of this championship, we would like to announce two good news. First, Akela is coming back! Yes, she is feeling much better nowadays and is ready to step on the mats again.

The second good news is that Zoe – a new promising session wrestler from Plzen, Czech Republic, that emerged recently on wb270, – agreed to work with Fight Pulse.

Both Zoe and Akela are going to take part in our first mini-event, a bracket based championship between four lightweight wrestlers, alongside Katniss and Revana, that will take place on 11th of November, 2015, two weeks after this post is published. Out of four contestants one will emerge as the winner and receive the title of Fight Pulse Lightweight Champion, along with a complementary gift.

Stats of the contestants (click on a wrestler’s name to view her profile):

NOTE: The championship has already been completed and the matches have all been released – FW-19, FW-20 and the final match (spoiler alert), FW-21.

As you can see, there will be at least 3 matches filmed with the wrestlers during the shoot. But we would like to film 5 or 6 matches on 11th of November. You can make any one or more of the matches below take place by sponsoring it. You can read about the sponsorship option and its benefits on our FAQ page. Here are the videos that we are considering after the championship matches:
– a schoolgirl pin challenge with any of the two wrestlers (except Akela vs Revana, and Katniss vs Revana, both of which we have already filmed)
– a head-to-head contest between any two contestants (you can read more about H2H concept in our first relevant release – HH-01)
– pins & submissions match – Zoe vs Akela or Katniss (the match(es) that doesn’t take place in the championship)

Please keep in mind that there is a limited amount of matches that we are going to film during the shoot after the championship, hence we will accept only first 3 sponsorship offers.

If you are not willing to order a custom video, you can vote for the video you would like us to make here: https://www.fightpulse.com/blog/vote-for-video-you-would-like-to-watch/

And now, please take a moment to vote in the poll to predict the winners of the two elimination matches, as well as the first Fight Pulse lightweight champion.

If you would like to support us and enable future bigger championships, please spread the word by linking to this page. You can use this full-size championship poster for the purpose: https://www.fightpulse.com/poster.jpg

If you are not subscribed to Fight Pulse yet, you can do so through the form on the right sidebar. Subscribers get automatic notifications via email about new releases, as well as site updates – blog posts such as this one. Being a subscriber you will not miss a thing related to Fight Pulse.

NOTE: in the wake of this championship we have introduced three basic weight divisions for future reference – lightweight (50 to 65 kg), middleweight (65 to 80 kg) and heavyweight (80 kg and above). Every wrestler has been assigned to a weight class, as can be read on their updated profile pages.