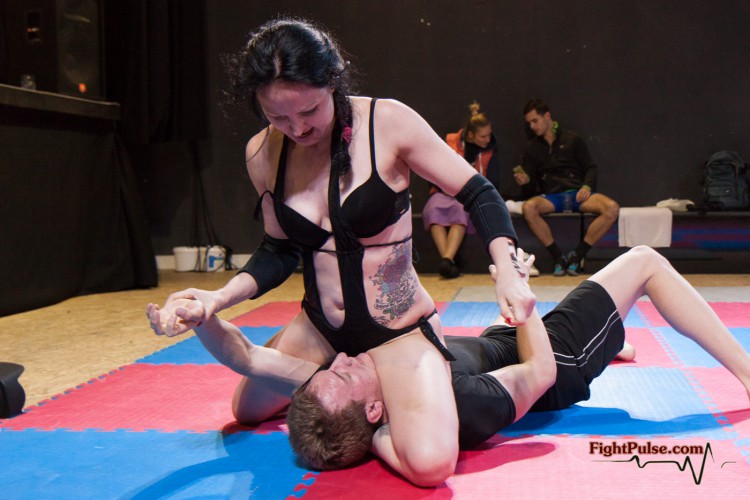 The fierce Russian wrestler Karina Gotika’s first video for Fight Pulse is a competitive mixed wrestling match in which she is pitted against Ryan. This is without doubt one of our most beautiful matches to date, thanks to Karina’s amazing performance, as she unleashes upon her larger opponent an outstanding array of leg chokes – front and reverse headscissors, triangle holds and more. Despite possessing obviously superior upper body strength, and being able to lift Karina off of him just using his arms several times during the match, Ryan seems to be simply unable to avoid Karina’s long strong legs getting wrapped around his body – his neck in particular – due to Karina’s speed, natural athleticism and raw, sometimes brutal, aggression.

Karina Gotika stands at 5′ 9″ (175 cm) and weighs 132 lb (60 kg). Based on our recent introduction of weight classes, Karina would be considered a lightweight. If you have read our recent post about Karina’s visit to Fight Pulse, you know that she has faced 3 male opponents while here – Ryan, Steve and Marek. We hadn’t contacted neither Ryan nor Steve since their matches with Viktoria and Zsuzsa on 31st of January, this year. Thus we had no idea that Ryan had gained 10 kgs (22 lb) of pure muscle during the last eight months (here’s how he looked in January – Viktoria vs Ryan). When he walked into the studio his new physique caught us by surprise, and I immediately regretted not asking for his stats this time before inviting him to our shoot, because I was no longer sure that this is the correct match for Karina, him standing at 6′ 1″ (185 cm), and now weighing 176 lb (80 kg). Karina, on the other hand, remained calm. Thanks to calculated ferocity and technique that was a blast for us to film, Karina dominated Ryan the entire match, making this big muscular 21-year old look absolutely powerless. 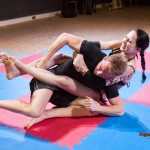 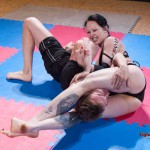 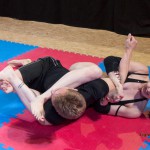 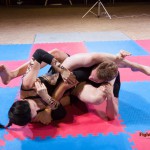 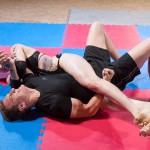 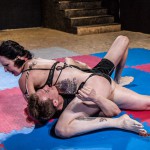 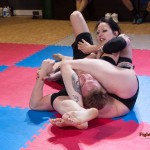 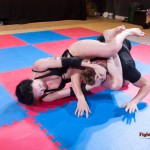 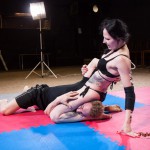 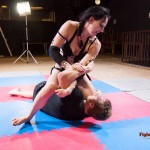