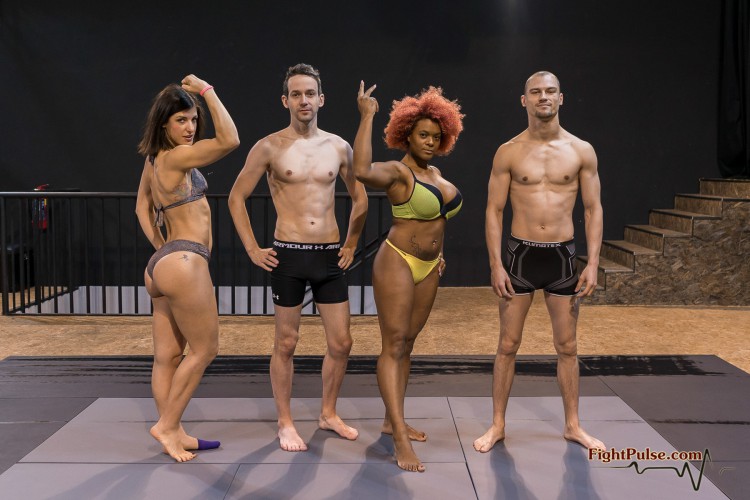 Dear Fans, we are excited to bring to you our third competitive mixed tournament! It features 4 lightweights fighting for glory and prize – Ivy Satinee (stats), Bianca (stats), Frank (stats) and Luke (stats).

Just like the second one, this tournament will have a championship-style play-off structure. It will consist of a total of 3 matches – Bianca vs Luke, Ivy vs Frank, and the final match between the winners of the two semifinals. As usual, there is monetary prize on the line for the winner. 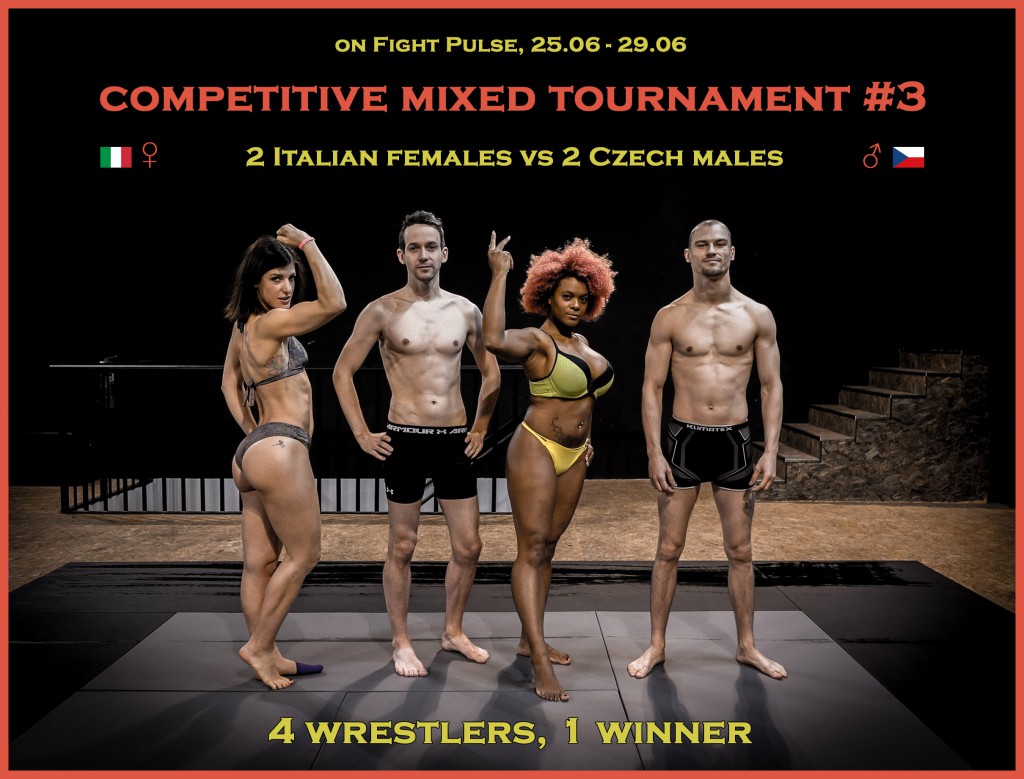 This was our first time filming with the Italian wrestlers, so we didn’t know much about them, except that they are both super competitive, and that they have both competed in catfights, which requires a lot of toughness. Ivy looks physically strong, and her background in athletics means she will have a strong core and lower body, as well as focus and composure.

From what we saw during the training, Bianca is extremely agile. She says she has beaten bigger males in competitive private sessions. Bianca is new to the fetish wrestling scene, but has already made a noise on the European circuit.

Frank is one of the best lightweight male wrestlers at Fight Pulse, and has been in wars with some of the biggest names on the roster, sometimes even coming out on top. He started fitness training religiously after his last loss to Rage which took place 3 months ago in the hope of wining the eventual, final fight later this year, and has since gained 9 lb (4 kg), going into this event bigger and readier than ever. From what we know, he has to be among the favorites to win the tournament.

Luke always keeps coming, regardless of how bad he is losing a match. Thanks to his perseverance as well as recent strength / fitness training, Luke has started winning fights and gaining confidence, becoming a more formidable wrestler. Despite being the biggest wrestlers of the four, he is definitely the underdog in this tournament. Can he surprise everybody?

The 3 matches will be released next week, in the given order on the following dates:

Please subscribe to our updates to get notified about these releases. If you are not subscribed to Fight Pulse yet, you can do so through the form on the right sidebar. Subscribers get automatic notifications via email about new releases, as well as site updates – blog posts such as this one. By being a subscriber you will not miss a thing related to Fight Pulse.

Feel free to leave comments and suggestions about this event in the comments section below! You may also discuss this event on our new forum: https://www.fightpulse.com/forum/general/mixed-tournament-3/

Looking forward to this a lot ! I am particularly excited about Ivy (or Stella on IFW) who has only done 2 mixed matches. I love her because she is awesome especially her powerful grappling style and her positive spirit towards wrestling. She has been very excited and happy when she had to opportunity to wrestle males… that positive spirit is contagious and adds to the experience of matches. I am also excited about Bianca and curious about the skills of the guys and I am looking forward to the matches :D. Those tournaments are a nice addition to your… Read more »

I hope Ivy will become a part of the fightpulse roster… one of my absolute favourites ! 😀