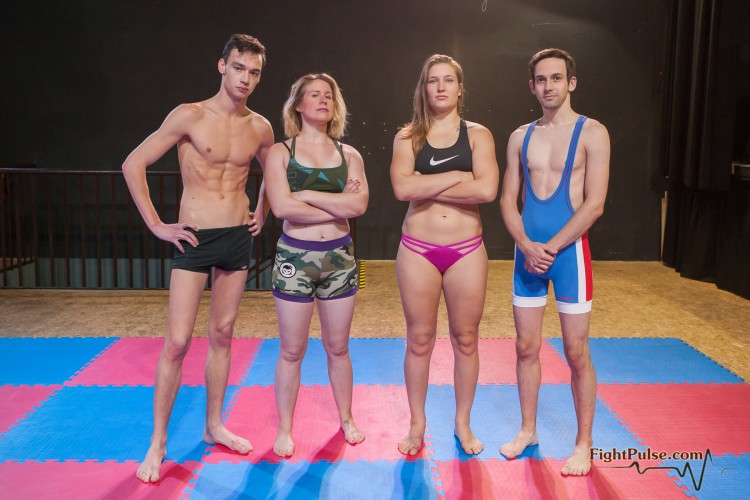 Dear Fight Pulse Fans, we are excited to bring to you our second mixed tournament – this time featuring middleweights (65 to 80 kg): Venom (stats), Diana (stats), Luke (stats) and Viktor (stats).

Differently from the first one, this tournament will have a championship-style play-off structure. It will consist of a total of 3 matches – Venom vs Luke, Diana vs Viktor, and the final match between the winners of the two semi-finals. There is monetary prize on the line for the winner. 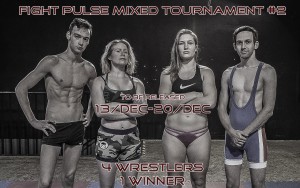 Venom is widely regarded as one of the sessioning scene’s best grapplers. Her grappling credentials are undeniable – she has a brown belt in Brazilian Jiu-Jitsu, and is an active competitor outside of the scene. This gentle killer visited Fight Pulse on the second weekend of November, and this mini tournament was filmed on the first day of our shoot. Venom has not lost a fight in the last 2 years, and is certainly not planning to.

Luke joined Fight Pulse earlier this year, but has since only appeared in semi-competitive and domination-style videos, due to his unwillingness to commit to a full-on competitive fight. Things seem to have changed and he will take part in his first true competitive mixed wrestling match in the first leg of the tournament, against Venom.

Diana, a black belt judoka, is the most skilled grappler in Czech Republic, and is also widely considered to be one of the world’s best. Diana and Venom are arguably the top 2 wrestlers in Europe, which makes their possible match-up in this tournament a very compelling fight. Diana hasn’t lost a match in the last 3 years, and is also planning to keep that no-loss streak going.

Viktor is without doubt one of the strongest males who have ever wrestled on Fight Pulse mats. While this young man’s experience is very limited, his incredible raw power is something that not everyone knows how to deal with.

The 3 matches will be released in the given order on the following dates:

Please subscribe to our updates to get notified about these releases. If you are not subscribed to Fight Pulse yet, you can do so through the form on the right sidebar. Subscribers get automatic notifications via email about new releases, as well as site updates – blog posts such as this one. Being a subscriber you will not miss a thing related to Fight Pulse.