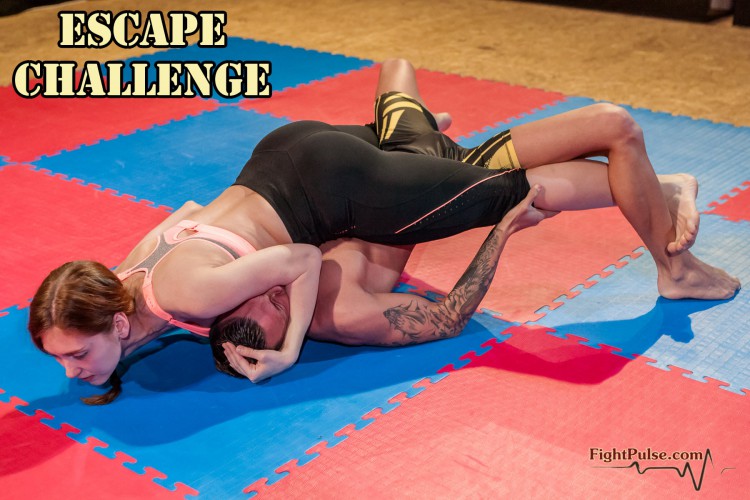 Dear Fans and Subscribers, we are excited to bring you our fist competitive escape challenge! In MX-88 Akela (stats) tries to immobilize or submit Andreas (stats) in 11 set positions, within one minute each, unless Andreas escapes earlier.

Akela’s first ever competitive mixed wrestling match was against Andreas, MX-58, whom she defeated decisively. If this challenge took place a year ago, we would have no doubts about the outcome. However, since then Andreas has improved rapidly, both technically and physically. He is fitter than ever now, and is a difficult opponent for any lightweight. Will Akela be able to maintain the 11 positions against Andreas today?

As you know, all previous escape challenges were released under NC type. This is mostly because some of the positions are domination holds rather than effective submission holds or pins and require either a scripted setting or great difference in physical abilities to keep an opponent down or immobilized for 1 minute. It was interesting to see which of the set holds would be effective in a real setting, and there were a couple of surprises for us in this contest.

MX-88 is our first real competitive escape challenge. In order to carry this out in a competitive setting, we had to modify the rules slightly. Since some of the holds are actually submission holds (triangle, figure-4, lotus lock), and a 100% application of these holds may lead to a surrender, a submission is also counted as victory for the round for Akela.

Victory poses are an integral part of the usual NC escape challenges. Unfortunately, we forgot to do victory poses for the rounds that Akela won. However, on second thought, since this is an MX title, performing them in a competitive setting between rounds that go back and forth would not make sense.

Here is a full description of the Escape Challenge style including the list of holds used:

This style consists of 11 rounds – 11 immobilization challenges. One of the competitors, the immobilizer, has to hold their opponent (or submit) in each of 11 pre-defined holds / pins for one minute, within which the competitor being held tries to escape. If there is no successful escape, the point for the challenge is awarded to the immobilizer, otherwise her/his opponent receives a point. 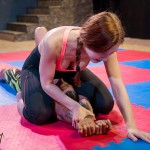 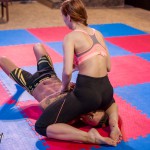 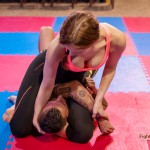 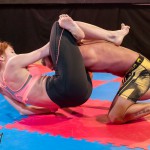 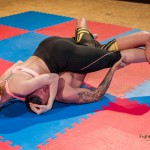 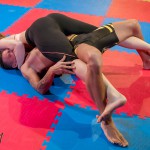 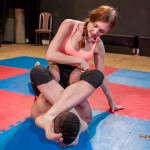 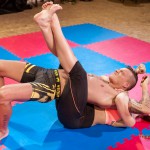 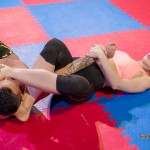 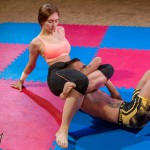 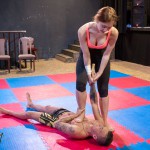 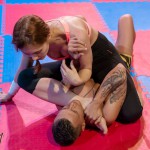 Akela is best but give her a more suitable victim next time. The lotus lock was awesome! The rest was not so exciting…Suggestion: Maybe start with reverse headscissor with his arms trapped straight forward beneath her, the girl locks her arms around/below his elbows. If properly applied this move is very difficult to escape and will be exciting to watch in this kind of video.

When starting from reverse schoolgirl pin with arms pinned below the hold should start much tighter with the arms locked beneath the girls legs. Her feet should be buried under his head creating a much tighter hold and leverage. This way the girl can use her legs and arms against only his arms. In essence she should be allowed to start with fullweight on his face almost to the point that he would be force to submit within seconds. The guy should not be able to move freely at the start of the hold, only after using alot of effort… Read more »

Actually, for this format a lot of holds were way too easy to escape. The Victory pose pin especially, as it isn’t even a hold anyone would ever use in an actual match. Also, the SGPs usually only need one burst of force to escape. The list of holds would certainly need to be updated in order to make this competitive. Mounted triangle, Grapevine pin, Lotus lock, Full-nelson / bodyscissors combo and Figure-4 headscissors with arm trapped, were the ones which allowed Akela to actually score, while even here the grapevine pin might be slightly below the efficiency level needed… Read more »