In the second video we shot with our new talent Katniss, she is pitted against Joseph. Even though it is a semi-competitive match, there is no shortage of action. So much, that we had to pause filming two times. In the first instance, Katniss had bent Joseph’s wrist in an awkward move against the mat, and he screamed in pain. Fortunately, no injury was caused as Katniss stopped applying pressure immediately. We did not count it as a submission. Second time we paused because while in Katniss’ headscissors Joseph kicked her in the face accidentally trying to apply bodyscissors. There’s also a beautiful unexpected submission attained by Katniss about middle of the match, where she sat on Joseph’s neck, squeezing it between her thigh and calf resulting in an instant submission. You can see Joseph’s hand raised & tapping her thigh in this photo. The video is from a better angle. Saying that, even though there are real submissions in this video, it is still of a semi-competitive match, which means Joseph is not trying his best most of the time. So, if you’d like to see absolutely competitive matches, check out our MX series. But I can say with certainty that even some hardcore competitive fans will like this video.

The action is beautiful, and you can clearly see the progress that Katniss is making from match to match, achieving and applying corss-body pins, grapevine pins, effective bodyscissors and headscissor holds. It is an intense one-sided match with lots of submissions and pins achieved by the female wrestler.

Also, we did not do staredown or interviews for this match-up. The video starts with them going at it. The wrestling lasts 14 minutes, and is followed by a sequence of victory poses. Victory pose fans will be delighted to see foot-on-chest, then foot-on-neck, followed by foot-on-face and tight neck-straddling bicep-flexing victory pose at the end of this video. 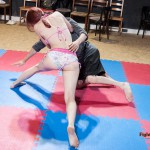 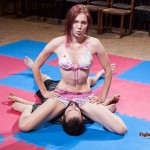 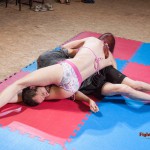 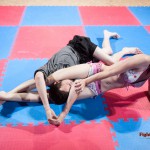 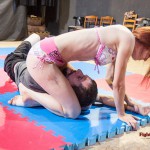 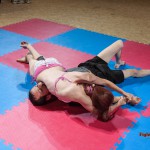 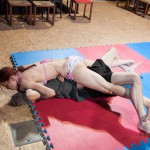