After facing Jane in her very rough welcome match to Fight Pulse (FW-28), Kristi is now facing an even more experienced opponent in Akela, who can be just as aggressive as Jane. If you have watched her first match you know that Kristi is a fighter at heart, and while she was outclassed, she fought out of many of Jane’s holds by sheer brute strength and power of will. She also learned a couple of important lessons in her first match. But will she be able to utilize her new experience to pose a challenge to Akela? Avoid the next paragraphs if you would like to remain unaware of the outcome of this match.

Akela controls the fight from start to finish, pinning down the newcomer round after round, despite her best effort to avoid pins, and scissoring her into submission time and time again. Kristi is a tough girl – she breaks her fingernail well into the fight and decides to continue with a bandaged finger despite being given the choice to quit – and she sure as hell fights her heart out, BUT has nothing else to put against Akela’s superior technique. Points are scored by Akela with a fantastic pace of 1 pin / submission each 70 seconds. Kristi does not hide her frustration and ultimately desperation from not being able to escape Akela’s pins and scissors. Almost after every round you can see the same picture: the newcomer catching her breath with disheveled hair, frustrated and desperate, and Akela confidently awaiting the action to resume. Here’s a gif of one of these moments between rounds:

In the pre-match interview Kristi says that she is expecting a tougher match than that with Akela. And her prediction comes true. Akela dominates Kristi throughout the match despite the newcomer’s best effort, enjoying every bit, performing perfect tight schoolgirl pins, surprise scissor catches, rib-crushing bodyscissors and headscissors to score point after point, despite already controlling the fight by a large margin. Akela ends the domination with a final superb foot on chest victory pose that will leave you, victory pose fans, breathless.

From exhaustion from such fierce, albeit futile, resistance, Kristi lies on the mats while we interview Akela and is only able to sit up for her own interview. This is a rough and beautiful encounter that fans of competitive female wrestling will enjoy, especially those that prefer one-sided matches where, while closely matched, one of the competitors is outclassed and dominated.

If you are a fan of Akela, you should absolutely not miss this video. She seems to be enjoying dominating her prey, finally getting an easier opponent for a change, since her last two competitive F/F fights were two of the most aggressive and fast-paced matches we’ve ever filmed (FW-27 vs Jane, and FW-21 vs Zoe – the lightweight championship final). 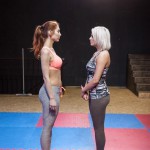 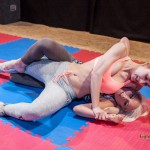 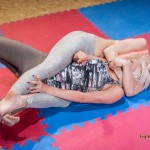 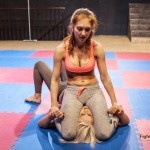 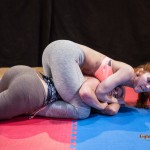 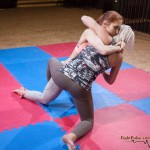 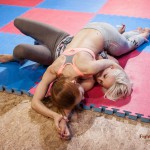 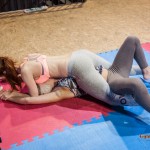 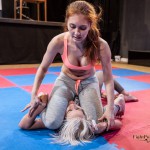 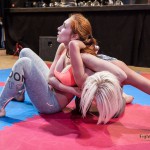 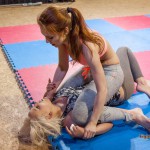 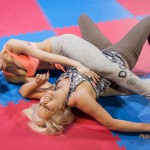 Spoiler alert: just like the description of this match says, skip the next paragraphs, if you do not want to find out about the outcome of this fight. For those who don’t mind, keep reading. I always like to find out who won, if possible, as that is a big factor for me whether I am going to purchase the video, or not. About the match itself: Akela was just way too much for Kristi. With only half power, she complete dominates this fight. I’d say she almost didn’t want to inflict too much pain on her rival, so she… Read more »