Akela (stats) and Luke (stats) fight for top position in this one-of-a-kind mixed wrestling match. Although this is an intense fight, it is by no means equal. Akela’s wrestling prowess and pinning ability are on display here, as she fights her way on top of Luke’s chest every round, trying to immobilize him under her. Luke does his absolute best each round, dislodging Akela multiple times, but it is only a matter of time before Akela forces him onto his back, straddling his chest and neck.

While Akela is dominant throughout the match, the fight itself is aggressive to the point where we had to intervene and stop the action once. In round 3 Luke accidentally kicks Akela in the jaw and a confrontation ensues (you can see the kick, but we paused filming right after) that we were able to stop in a timely manner. When the action continues Akela is even more forceful with her pins, crushing Luke’s refueled resistance under her weight with more intensity. This is perhaps most obvious in her pin that ends round 5, as Akela angrily drives her butt onto Luke’s chest two times after escaping his half-guard, while looking down at him with visible aggression. Both wrestler reflect on the kick and the incident in the post-match interviews.

Akela scores over 15 pins over her male opponent, winning the match in a dominant fashion. When asked in the post-match interview what she feels when she is on top, pinning somebody down against their will, Akela gives a fascinating answer: “…like it’s meant to be that way!”

If you are a fan of females pinning down males aggressively in a competitive setting despite their best effort to fight back, MX-108 Akela vs Luke is THE video for you! 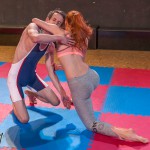 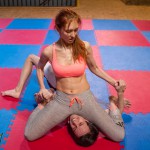 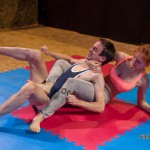 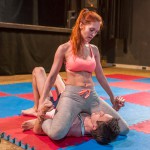 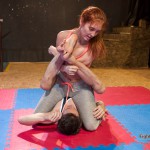 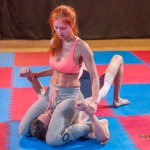 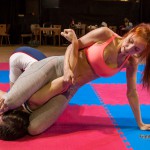 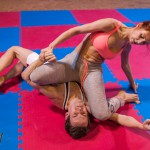 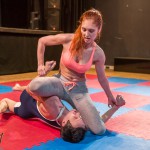