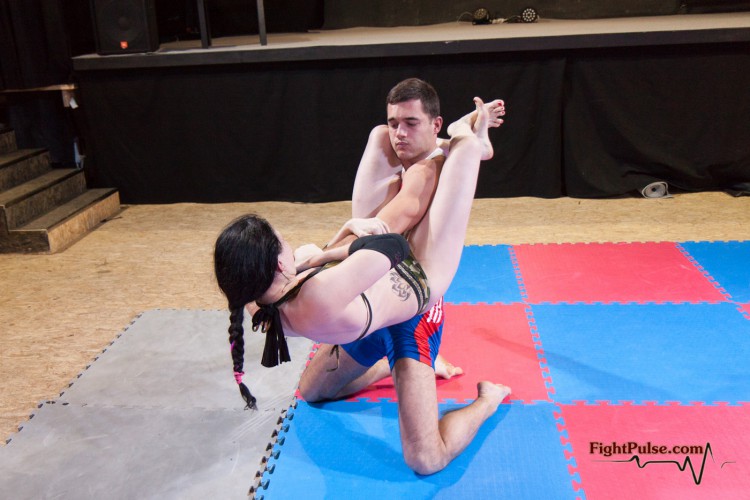 Karina Gotika’s (5′ 9″, 132 lb; 175 cm, 60 kg) second mixed wrestling match during her visit to Fight Pulse was against Steve (6′ 2″, 170 lb; 189 cm, 77 kg). Returning after 8 months of absence, just like Ryan, Steve has grown stronger. Manual labor has helped him develop a pair of incredibly strong arms. He has also become fitter and improved his stamina. Unfortunately, he has not taken any wrestling classes, and only relies on his superior upper body strength during this very aggressive encounter. Karina is yet again much smaller than her opponent – almost 40 pounds lighter and 5 inches shorter.

One will not be wrong if they say that this is a match of legs vs arms. While Steve mostly uses his upper body to control the opponent and gain advantage in this match, Karina relies on her excellent legwork, developed through BJJ training, and tries to choke Steve to submission with them. Once again, Karina demonstrates incredibly leg power, agility, and fantastic defense techniques, lifting and throwing the 170 lb man off her several times during the match (you can see it done in the preview video below) using only her legs.

This match is not one of those matches where there is such a considerable difference between the skill level of opponents, that we find it hard to count the number of submission correctly during the match. This match is a competitive battle between a man and a woman that are closely-matched, one having size and strength advantage, and the other having experience on her side. Both wrestlers are aggressive, and every submission is earned through hard work. In fact, this might as well be one of the most aggressive matches that we have filmed so far. Karina gets elbowed in the face several times, and Steve takes several knees to the face, one of them being a very hard one. In fact, we had to stop the match and let him take his time after one of these knees (depicted here).

This video is a must-see for fans of real competitive mixed wrestling. 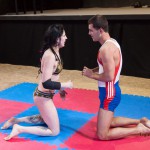 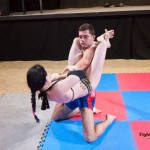 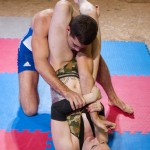 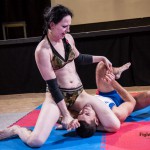 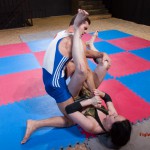 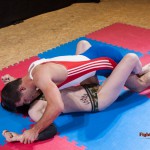 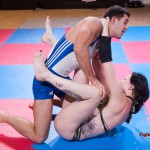 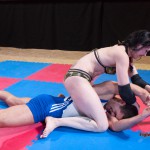 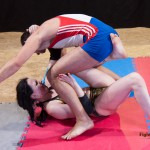 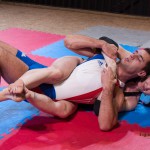 This is a hard-fought competitive match, featuring an smaller and more experienced woman taking on a larger and less experienced man. Both Karina Gotika and Steve want to win and put forward a great effort in this match, and because of that it is a fun match to watch. Karina is physically fit and has much more wrestling experience and knowledge than Steve and she also has stronger legs than him. But Steve is very fit and is in great shape and has a stronger upper body than her. The description of this video is correct in saying that this… Read more »