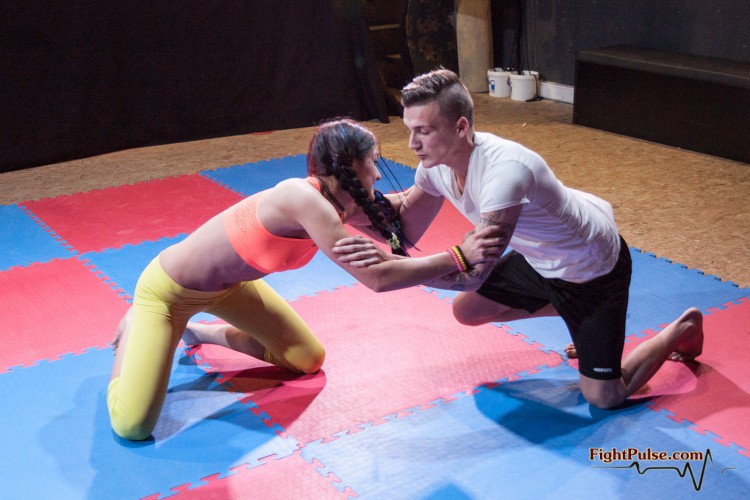 Those of you waiting to see Jane (stats) in a competitive mixed wrestling match, wait no longer! In MX-54 she is pitted against a male, for the first time, in a real competitive intergender encounter. Jane’s opponent is Andreas (stats), a newcomer to Fight Pulse.

When we talked to Jane about a real mixed wrestling match, she became a little nervous, but excited. Jane is very new to wrestling, and this match was filmed only at her 4th shoot with us. Seeing Andreas walking into the studio, – a lean young man with heavily tattooed well-defined arms, – Jane said she is worried that she might not be able to perform well enough. We told her what we knew already about Andreas, which is that he has absolutely no martial arts experience, and will rely solely on his upper-body strength to control and pin down Jane, and that she has all the tools she will need to counter that.

After the interviews were complete, the match commenced. Following the staredown both opponents got to their knees, approached each other cautiously, and gripped each other for the takedown. A rare thing happened then – Jane lost a takedown. If you have seen her matches with us you are aware of Jane’s incredible speed and natural fighter’s intuition. Because of these qualities she rarely, if ever, loses a takedown, despite being new to grappling. As Andreas was holding Jane down, squeezing her with all his might, it was obvious that Jane’s nervousness has not disappeared, and that she is wrestling in a very reserved way, which has never been the case before. She was never at a psychological disadvantage before in any of her matches, until today. Nevertheless, Jane soon gained her composure and maneuvered herself and wrapped her legs around Andreas’s waist and squeezed and held him tight, avoiding him crawling up on her body for a pin. Andreas felt the pressure, however he did not let go of his hold. This reserved approach by Jane caused the round to end in a stalemate, and it was restarted from kneeling position.

In the second part of round 1 Jane was still on the defensive, afraid of making a mistake. However, she was able to counter-attack from a defensive position, locking her legs around Andreas’s neck at a certain point in headscissors. Very soon Andreas tapped. After the first submission Jane completely abandoned all fear and wrestled just like she wrestled Akela, Zoe, Revana and Kristi, – confidently, fearlessly, aggressively, always on the attack. Andreas didn’t know what hit him. He was forced to tap again and again trapped between Jane’s strong legs. As Andreas started to get exhausted from the constant pressure that Jane applied, as well as constant heavy squeezing between her legs he was made to endure, Jane started to win takedowns and straddle Andreas more often. After round 5 Jane was waiting for Andreas confidently on her knees to start the next round, but he just sat there panting, after a while asking for a break. We gave Andreas a break, and as he lay down on the mat gasping for air, we had a short interview with Jane where we asked her what she did to Andreas. She said only that it is “nature”.

The rest of the match continued in the same manner, with Jane coming out on top and basically dominating the now-exhausted and weaker Andreas.

Here’s a recap of why we think you will love this video, if you are not excited about it yet:
– both opponents are new to wrestling, but female is still dominant, facing a slightly heavier opponent, thanks to natural fighting instinct, superior endurance, and some experience
– this is a debut intergender match for both opponents
– the match is full of beautiful bodyscissor and headscissor submissions and transitions between them
– it is real, as are all of our MX titles

This competitive mixed wrestling match is one of the most exciting mixed matches we have ever filmed. 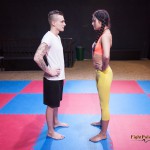 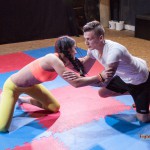 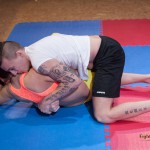 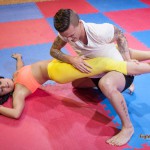 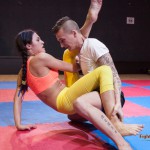 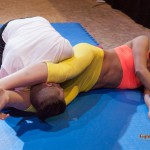 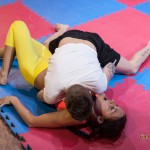 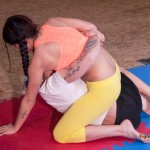 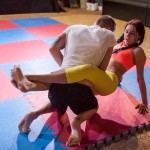 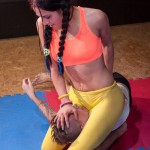 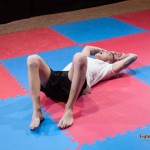 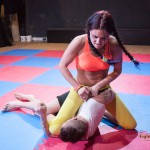 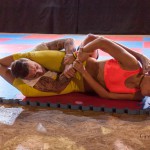 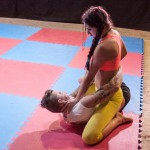 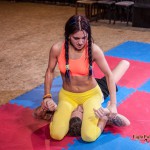 This is a really fun match between two beginners. It is really cute to see how Jane is clearly intimidated by the thought of wrestling a male for the first time. As she notices who is in charge though she gains more confidence and has a lot of fun wrestling him :). She even starts staring him down at the beginning of rounds. This is very dynamic, fun and sexy, I definitely recommend buying this video. I am definitely going to buy the other competitive match between the those two someday ! 😀